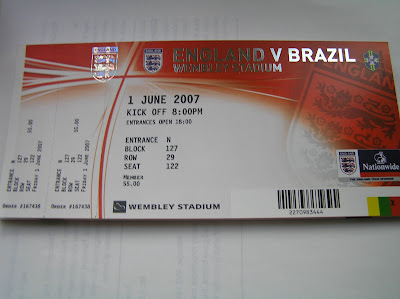 Friday, 1st June 2007 cannot come quickly enough. The tickets are in my hands, the New Wembley hosting its first full England international and Brazil, the ultimate international side, whether world champions or not, will be the visitors. They have in turn, indulged the occasion and Kaka and Ronaldinho will appear when they have declined the opportunity to play for their country in the Copa America. There was nothing more to ask for, but then, out of the mist of rejection, in comes David Beckham, recalled to the squad with England desperate for a win the following Wednesday in Estonia. This makes the occasion complete, arguments for his suitability later in the year when he is playing for the Los Angeles Galaxy can wait for another day. Roll on Friday.
Des Kelly's on the button

Posted by baldangel at 18:16 No comments:

Forty-eight games in a season is an exceptionally poor return for me and as I said in my opening post perhaps I fell out of love with football a little bit. Gillingham were pretty poor for the most part, despite having a great home record with 14 wins the football for the most part was mediocre. The form away from Priestfield was dire with just three wins all season. There were some highlights, the wins over Millwall (always satisfying) and Swansea in the space of four days in September, the Friday night win on Sky over Tranmere and the Easter Monday triumph against Bristol City, but these were offset by shocking performances against Northampton and Brighton. As I am no longer a regular traveller I was not privy to any of our wins at Doncaster, Tranmere and Chesterfield, but was in attendance for the disastrous last 15 minutes at Leyton Orient, where we conspired to lose a three goal lead to a hat-trick from a full back. Thankfully my reluctance to travel meant I avoided the lengthy trek to Carlisle for a 5-0 defeat, the 4-1 hammering at Oldham and even the New Years Day 4-1 reverse at Millwall.

So where did it all go wrong? Two areas can be easily pinpointed, we conceded 75 goals and had the second worst goal difference in the Division, only bottom club Brentford had a worse goal difference but even they let in less goals. The reason for this poor defensive showing were the use of six goalkeepers during the season, Kelvin Jack played only nine games through lack of fitness and loan keepers came and went and the lack of an established central defensive partnership. Brent Sancho fell out of favour early on and Gillingham never really found the right combination until late in the term when Ian Cox found a bit of form alongside long-term loanee Ben Chorley. In attack there was never a consistent partner for Gary Mulligan. Ndumbo-Nsungo and McDonald were particularly disappointing and the season ended with Danny Spiller having to fill in up front. Goals were not a real problem, we scored more than most, but they came in the greatest part from midfield with Michael Flynn, the club's leading scorer with 12.

A lack of resources was bemoaned all season by both Jepson and Scally and a better budget has been promised for next season by the chairman. Three-quarters of the squad end the season out of contract, so there is plenty of scope for wheeling and dealing during the summer.

Tonbridge consolidated their position in the Ryman Premier admirably, in fact they flirted with the play-off positions for most of the season, but had to settle for an eleventh place finish. In Jon Main they had a striker who had a glorious season, scoring over 40 goals and attracting the attention of Championship clubs such as Wolves. They also frustrated on occasions, one shocker of a evening against East Thurrock.

England were also pretty much a disaster area. Following the poor World Cup, Steve McClaren took over and results went from bad to worse, culminating in a unsatisfactory win over Andorra that met with much abuse from the travelling English support. Due to family reasons I did not make the trip to Barcelona and have to say on and off the field I was glad not to have been a part of what went on. I travelled to Macedonia and Croatia, neither being great games of football and whilst we (Ann travelled as well) managed to avoid trouble the Zagreb trip was marred by over-zealous police presence and a bloody awful England performance. Brightest spot in this England calendar will come after this is written, with England's return to Wembley to play Brazil. 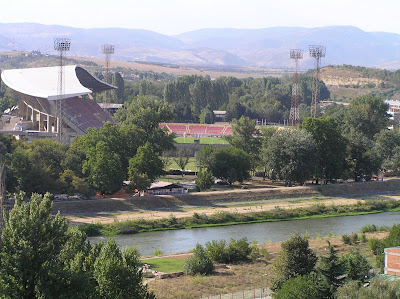 I managed to knock one more ground off the Football League list with the visit to Cheltenham. I made a total of 48 games during the season which is pretty poor and perhaps my mention of falling out of love with the game accounted for the lower than usual total. All I need is a resurgent Gillingham and all such thoughts will be banished. 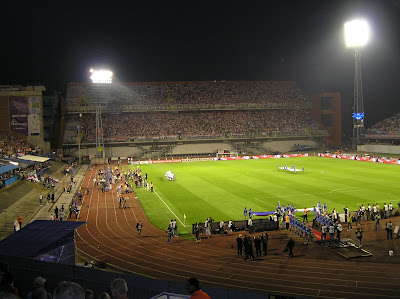 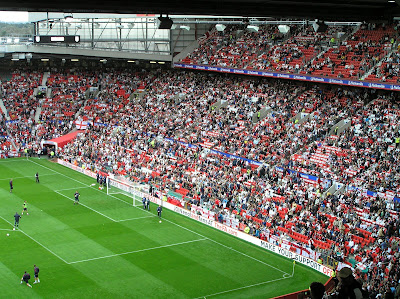 Posted by baldangel at 18:40 No comments:

My statistical numbering runs from the last time that I started keeping records seriously. So each match is numbered as such 01 (the number of the match that season) / 07 (the year the season started i.e., 07/08 / 617 (the number of games under this particular set of records)

My lifetime totals will begin from 218 grounds visited, watching 1,868 games.

The grounds figure is accurate, the games figure was accounted in the summer of 1999 searching through old programmes, previous records and delving into the recesses of a dimming memory.
Posted by baldangel at 01:32 No comments: 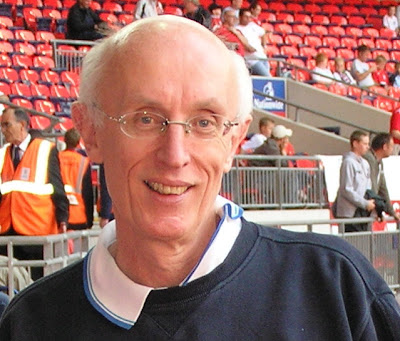 Was 2006-07 the season I finally fell out of love with football? Well probably not, but it was a very disappointing term. The fault for this must lay with Gillingham, whilst I had no great expectation of them challenging, I did not expect a season where for the most part we were looking over our shoulders at the wrong end of the table. Positive noises have emanated from Priestfield since the last day and because of this I've decided to incorporate the record-taking that I've done for years into one of these new-fangled blogs. The idea is to chronicle the ups and downs of the 2007-08 season as I follow the fortunes of my teams. Hopefully this will manifest itself into a football blog in the wider sense and not just centred around a couple of clubs. The teams that I will be following are:
Gillingham: Have supported the club for 31 years and a season ticket holder.
Tonbridge Angels: The club I've supported all my life.
England: Home and away follower of the national team, hopefully will add a bit of continental flair.

References will also be made to clubs where I have a passing interest such as Manchester United, to be fair more than a passing interest, Tunbridge Wells and my friends teams, Oldham, Wolves, Hastings United and Frome Town. Lets see how it goes, and the start couldn't come much bigger, a trip to the New Wembley for England's first international back home against Brazil. Wouldn't it be lovely to think that it might end up back at the new stadium with Gills making a visit.
Posted by baldangel at 16:01 No comments: