A kind, traffic-free run down to Kingsnorth, had me arriving at Ashford United’s Homelands Stadium bang on kick-off time. A swift walk from the car park to the turnstile got me into the ground within a couple of minutes but, sadly, this wasn’t quick enough to see Gillingham’s opening goal from Aiden Blanchard. Already in place were several other Gillingham supporters who had also been at Faversham and must have given themselves some extra time for the journey. 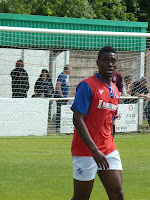 An incentive of doing both games on the day was being able to have a first look at Gillingham’s only summer signing so far, Amine Linganzi, who has arrived from Accrington Stanley. Having missed Stanley’s Priestfield appearance in which Linganzi was evidently outstanding, I had no idea what to expect and the first impression was very positive. Firstly, Linganzi has a sheer physicality that offers a presence that was not in evidence last season and secondly, from his deep lying midfield position he demonstrated a range of passing, spraying the ball accurately 40 yards to the wings.

After the newly promoted Kent League side had scored an equaliser when a 25 yard shot from Liam Whiting took a deflection on its way past the young triallist keeper, Gowan, it took until almost half-time for Gillingham to regain their lead when Leon Legge powered a header home from a corner.

The Homeland’s pitch looked an absolute bowling green in comparison to the one at Faversham were, especially around the centre circle, it looked a bit of a cabbage patch.

The fourth eleven of the afternoon that took to that fine surface was a youthful one that bore more resemblance to Twydall Under 12’s than a senior Gillingham side. Chris Whelpdale was the exception to the rule, obviously included to play the role of schoolmaster. Around the hour mark, both sides hit the crossbar within a few minutes of each other, Gowans tipping a drive onto the bar whilst at the other end Jack Sellens also struck the woodwork.

All in all, a quite satisfying start to pre-season, if even if Wimbledon is only half-way through and the Ashes series is yet to start. 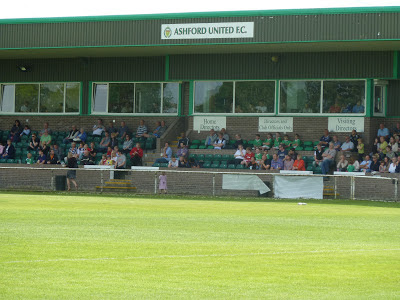 Posted by baldangel at 21:41 No comments:

I cannot remember ever starting pre-season in June and it must also be a first to start with a double-header for the same club. The relatively close proximity of Faversham to Ashford (around 18 miles) offered the opportunity to watch both games (with the element of missing a little of both) that, following a summer without tournament football, I found irresistible.

I haven’t been to Faversham since Tonbridge’s Kent League days in the early 1990’s and it hasn’t changed much in the intervening years. On a warm day, Gillingham fans turned out in decent numbers to see their championship winning side which had been split into two for the both venues and added to with development squad and youth team players plus a couple of young triallists at Ashford that were the only players to play a full 90 minutes. With over 40 players on show in a Gillingham shirt alone, let alone the countless substitutions that were made by the non-league opposition it was difficult, impossible to recognise who was who. So, it has to be considered a lost opportunity by both clubs that even a single page team sheet that could have been sold for 50p or a quid wasn’t produced.

To arrive at Ashford, within 10 minutes or so of the kick-off was going to mean leaving the Faversham game with about quarter of an hour to go. The first half team at Faversham was the strongest with Bradley Dack the stand-out performer. The home side opening the scoring with a peach of a free kick from Wayne Wilson into the top corner that gave Stuart Nelson no chance. Gillingham responded and goals from Aaron Millbank, who tucked in a rebound off a post and a sublime chip from Dack that did nothing but emphasise his quality. Of the youngsters, Stephen Butcher looked a bit of a prospect.

The half hour of the second period that I watched saw transfer-listed Adam Birchall show a sharpness that is going to be an asset to whoever he plays his football for this coming season. He found a yard of space in which to plant a stooping header past a man mountain of a goalkeeper to put the visitors a couple of goals to the good. In my absence Faversham pulled a goal back before Birchall smacked home his second from 20 yards to record a final 4-2 score line. 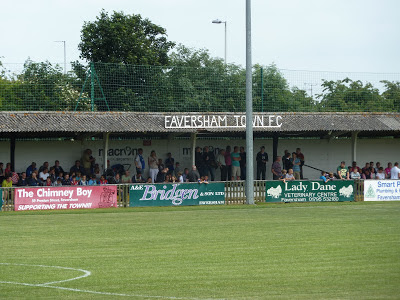 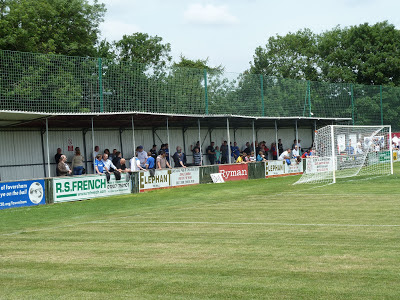 Posted by baldangel at 21:35 No comments: 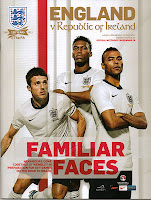 This was a pointless exercise on every conceivable level. It was of no value, whatever the England manager might say, to Roy Hodgson and as a humble punter it was both a waste of time and money. If the Football Association thought that playing this fixture three weeks beyond the end of a long season, with no tournament football to grace the summer, an ideal way of both celebrating their 150th anniversary and also putting the dark spectre of the 1993 riot in Dublin behind them then they were seriously deluded.

Wembley has long since lost its shine with this punter. The hideous incident when Wales were the visitors has left its scar and from the moment I reach my seat I’m glancing at the people around me looking for the character that is going to be trouble and for this match against the Republic of Ireland the potential was almost inevitable. Ten minutes before the kick off the vacant seat alongside me was filled and straight away the radar said that this was going to be an uncomfortable 90 minutes and as soon as No Surrender was entered into God Save The Queen my worst fears were confirmed.

The FA’s David Bernstein praised the England fans for their good behaviour and in general I’m sure this was the case, but Mr Bernstein might want to give up his posh seat in the Royal Box to come and sit in the stalls with Joe Public and see what really goes on at Wembley. Perhaps the Scotland game might be a good day for him to conduct his awakening.

After 13 minutes in which the Irish largely dominated a long cross into the box found Shane Long who managed to get between the English central defenders to plant a firm header past Joe Hart. With so many Irish people living in England, and London in particular, it was inevitable that their support would be anywhere and everywhere in the stadium and the few that were around us showed their delight at their opening goal. My neighbour’s face contorted with rage, why have these aliens from another galaxy entered into his space, albeit that the nearest was a few hundred seats away. He was out of his seat, the verbal diarrhoea that he spouted showed blatant disregard for the women and children in his vicinity. This was it; this is what it’s like sitting in the cheap seats at just about every England game at Wembley.

When England are thrashing the might of San Marino or Andorra then the mindless morons are plunged into a stupor with the boredom of it all, unless the drink has already done the job. This is when Wembley becomes comfortable, put a competitive match in front of them, with an element of away support then it is a nightmare. The forthcoming Scotland match may have the potential for trouble but the qualifier against Poland almost doesn’t bear thinking about.

As fighting commenced in the aisles and the stewards did their best to contain it, Frank Lampard equalised within ten minutes and from that point my friend alongside indulged in nothing worse than the rest of us were doing, moaning about England. That’s the other feature of the England Wembley experience; the home side are not very interesting. They gave the ball away with reckless abandon and are as creative as a two-year old with a paintbrush.

Both sides huffed and puffed their way through a dour second half with the odd chance coming for both, but this was a game too far for everybody, the swim suits were packed and there is a sunbed waiting in an exotic location for our pampered few in the new white shirts that look far too similar to those worn by the Germans in the 1966 World Cup Final.

I wish I had signed off with the high of Tunbridge Wells’ Wembley visit instead of sullying this wonderful season among the dross that do their level best to ruin the reputation of the real England supporters.