The events of Marseille and Lille had left a little apprehension about the game in Lens. I was as confident as I could be that there shouldn't be any trouble with the Russians, at least, in Lens. If they had a mind to travel from their game the previous evening at Lille, surely the French police would have enough nous to turn them back en route. Whether the English and Welsh would see eye-to-eye was another matter. My principle concern was a knowledge of the relatively small town of Lens from a previous visit for the 1998 World Cup. If there was to be any problems, it was going to be in confined spaces with nowhere to go.

The heightened security at the Channel Tunnel led to a 45 minute delay, time pinched from a relatively tight timescale. As usual though, the emptiness of the French roads saw a straightforward run down to Lens and, with a little detour, into the Park and Ride scheme set up on the edge of town. The coaches were queued to take us into the town centre and as soon as there was anybody on board they were sent on their way. Ours had just us four and a half-a-dozen Belgians who serenaded us with English football songs, but it all became a little surreal when they broke into God Save The Queen.

Once in the town it was quickly evident that everybody was happily mixing with no discernible tension. Both groups of supporters were spilling out of the bars and drinking together on the pavements outside. Breathing a sigh of relief, there was not a Russian to be seen.

Once in the Stade Bollaert-Delelis I observed a stadium unrecognisable from the one I visited in 1998 following a rebuild that was completed in 2015.

The Welsh anthem was, of course, beautifully sung from the assembled male voice choirs. But, more importantly, it was respected by the England support and, once finished, it was greeted with warm applause that continued for some considerable time before God Save The Queen was sung with equally impressive gusto.

England should have been in front after just seven minutes. Raheem Sterling fluffed his lines from close range and with that miss his confidence drained away like water down an open plug hole. He literally could not do a thing and the frustrated England following were on his back.

Although England dominated the possession, half time was approaching without either goalkeeper having to make a real save. Wayne Rooney was caught in possession about 35 yards from goal and when he wrestled Hal Robson-Kanu to the ground the referee rightly awarded a free kick to Wales. It could only be Gareth Bale that was eyeing the goal from such distance. His shot dipped in front of Joe Hart, but the goalkeeper got both hands to the ball only for the shot to evade his grasp and into the net. England were downcast with the half-time whistle greet by boos whilst the Welsh were in full voice.

Cautious Roy became Hodgson the Gambler as his half-time substitutions saw the withdrawal of Sterling and an off-colour Harry Kane in favour of Jamie Vardy and Daniel Sturridge. This was Hodgson going for broke, perhaps he thought he had no choice with his job seemingly going down the gurgler.

England surged into attack from the first whistle of the second half and after 56 minutes were level. Sturridge played the ball in, and from close range, Vardy poked the ball home. The Leicester City striker was stood in an offside position but was played onside as the ball came off the head of the Welsh captain, Ashley Williams.

The Welsh spent the next 35 minutes camped on their 18 yard box, they could not get the ball clear without it coming immediately back. Bale now cut a peripheral figure starved of the ball. But defend they did, showing great courage and resilience.

The Gambler had one last throw of the dice, on came Marcus Rashford for Adam Lallana.

The game entered its time added-on when Sturridge played the ball into Vardy, who in turn moved it on to Dele Alli. Sturridge continued his run, took a pass from Ali and shot under the diving body of Wayne Hennessey. The sight of Hodgson dancing on the touchline was only eclipsed by the pandemonium that was going on in the stands.

The picture on the big screen turned to the ashen-faced Bale, whose mischievous comments had wound up many. I had to remember back to a vintage Barry Davies commentary, "look at this face, just look at his face!"

Back on the streets of Lens after the match, all was peaceful. England fans celebrating hard, the Welsh a little solemn. But they have another chance; an opportunity to send those Russians home and earn the thanks of all of France. 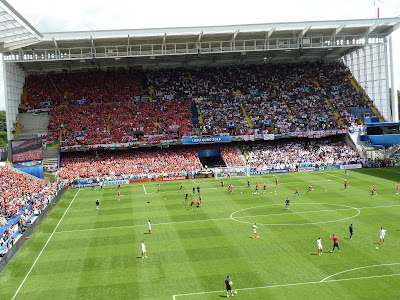 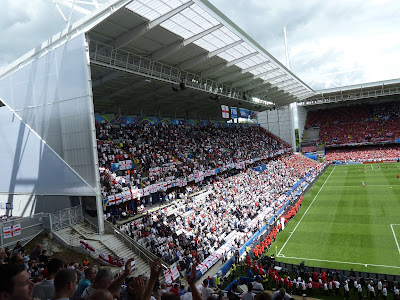 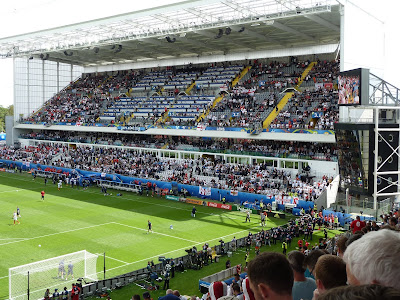 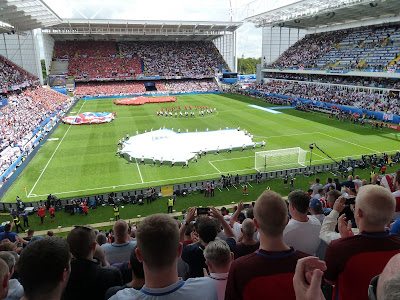 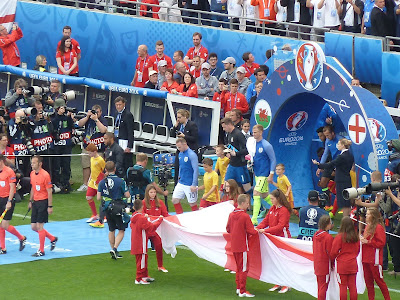 Posted by baldangel at 14:05 No comments: