Dartford emerged from the Conference South play-off to stake their place in the Conference for the first time since 1986 when the division was known as the Gola League. As the team that finished second behind champions Woking, it is fitting that they were the team to win a tight encounter against a Welling side that didn’t have the cutting edge to complement the amount of possession they enjoyed.

In front of a sell-out 4,000-plus crowd, a fantastic turn-out considering the mouth-watering spectacle that the final day of the Premiership promised (and lived-up) to be, Dartford struck in just three minutes, Lee Noble stunning the visitors with a well struck shot from 25 yards that nestled in the bottom left hand corner.

That was the beginning of an opening period of 20 minutes in which Welling could not get any sort of foothold in the game. Elliott Bradbrook headed wide from a long throw and crosses into the box were causing Wings’ keeper Craig Holloway and the thousand Welling fans at the opposite end several heart stopping moments.

Going into the last 20 minutes of the half and still just the goal behind, Welling inched their way back into the game and it took a superb saving tackle from Tom Bonner when Loick Pires was about to pull the trigger on the visitors’ best chance of the half.

This was actually quite a defining point in the game as the pattern was set with Welling’s dangerous pairing of Pires and Louis Cumbers well shackled all afternoon by a disciplined Darts back four with Lee Burns and Luke Wilkinson outstanding.

Cumbers managed to get free just the once but his cut back to Joe Healy who blazed over the bar to once again fail to work Louis Wells in the Dartford goal.

The second half continued in much the same vein with chances at a premium, most of them going Dartford’s way as Welling enjoyed their 50% of the possession but by the end of the game Wells had not had a shot in anger to save.

The whistle blew to the jubilation of the home support who have enjoyed massive success with a strong support base since their move to Princes Park. The club are ready for the Conference and I guess there were more than a few sore heads among their fans on Monday morning when they woke up to the realisation that those nice comfortable Ryman and Conference South trips to places such as Tonbridge are no more and now they are faced with 600 mile round trips to places such as Gateshead and Barrow but with the equivalent excitement that ex-League clubs such as Lincoln City and Stockport County now stand on an equal footing alongside their local rivals Ebbsfleet.

Good luck to Dartford, it is wonderful to see two Kent sides in the premier non-league Division, just one more step away from the Football League and who is to say that the last step is one too far. 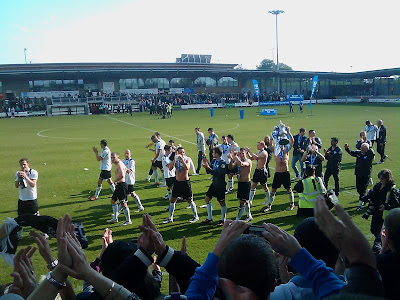 Posted by baldangel at 18:35 No comments:

Gillingham’s first meaningless final game of the season for five years proved to be exactly that . . . a lifeless affair that was won by two Charlie Lee goals to ensure that the club finished, as last season, one place outside of the play-off places.

Lee collected a clearance, strode forward to 25 yards from goal and struck a daisy-cutter that eluded Morecambe’s keeper Barry Roche to nestle into the bottom corner after 18 minutes. On 76 minutes a delightful through ball from player of the year Danny Jackman sent Lee through on goal to side foot home from eight yards. Lee sensed his opportunity for a hat trick and had another couple of efforts that were high, wide and not too handsome.

The season ends with a home win but the final verdict can only conclude that this season has once again ended in failure and this is the time to ask the questions why. Andy Hessenthaler’s stewardship of the club is brought into question and we will know early next week whether he is going to pay the ultimate price.

It doesn’t take the Einstein equivalent of a football guru to figure out where it all went wrong. Gillingham scored more goals than anybody else in the Division, but conceded more than any of the teams that ended above them, so quite obviously it was the abject failure to defend that cost them dear, but why?

Hessenthaler’s defence would be that injuries have not allowed him a consistent back four and whilst all clubs suffer injuries in the course of a season, he does have a point. Gillingham have had more than their share of long term loss of players this term. In pre-season there was the loss of Adam Birchall, with the goals scored column in very positive territory it could be argued that, in fact, his loss was covered. My counter argument would be that had Birchall been fit all season then the money that was expended on Joe Kuffour, Gavin Tomlin and to a lesser extent Rowan Vine could have been better spent on defenders when the injuries started to bite in that area.

The paramount loss of the season, in my opinion, was that of Barry Fuller. From the moment his season ended in mid-September, the back four became unbalanced with square pegs being forced into round holes. Matt Fish, who had only featured from the bench in the opening games, came into the side and struggled to find his feet at Football League level. Charlie Lee, a waste at right back, and Matt Lawrence, at 37 no longer having the legs for the position, filled in but without any sense of security. Teenager Jack Evans held the position for February before Fish came back, found a bit of confidence and secured his place to the end of the season.

The other flank was hardly a success story either. Joe Martin may have held down the position for most of the season but his form hasn’t been great and two sendings-off have led to suspensions.

How many central defensive pairings can you fit into one season, for consistency the fewer the better, but in Gillingham’s case it amounts to eight. Lawrence and Andy Frampton were the opening pairing, but their lack of pace was exposed as soon as defensive midfielder Jack Payne was injured. Garry Richards was drafted in after spending the early weeks on the bench, but a car crash of a defensive performance at Wimbledon, when Fish, Lawrence, Richards and Frampton were dismantled with ease led to angry scenes on the Kingsmeadow terraces. Simon King, who spent time on loan at Plymouth to get games after his lengthy lay-off, has never been fit enough to complete a consistent run in the side and when Richards broke his leg in March the catalogue of woe was virtually complete. If there is a silver lining to come out of this carnage it is the emergence of Connor Essam who has been ever-present since mid-February and has looked a fine prospect.

That for me, is the case for Hessenthaler’s defence (or lack of it). Whether Mr Scally sees it this way, the coming week will tell. It has to be said that, in a Radio Kent interview on Saturday evening, Hess came across far less confident of his position than he had previously. The week will also see the announcement of the departure of several players, 19 are out of contract and a complete overhaul of the squad is to be expected, whoever the manager may be.

Gillingham missed out by the equivalent of one victory and there are many choices of where those elusive couple of points could have been earned. The shocking decision of Scott Mathieson the allow an equalising goal for Bradford when his linesman has given offside is an example of circumstances beyond anybody’s control whereby the loss of all three points at home to Wimbledon after being 3-1 up was simply down to woeful defending.

Gillingham failed to find a consistency throughout the season to deserve a promotion that should have been attained with the “best squad ever assembled in Paul Scally’s time” and a budget supposedly among the best in the Division. We wait with interest to see who carries the can for the failure.

Posted by baldangel at 11:11 No comments: