A home defeat and conceding a hat-trick of goals within a five minute second half period were good reasons for concern but football was put into stark perspective as the club paid tribute to one of their former players, Charlie Slocombe, who died in the week after collapsing playing six-a-side football. His family and friends attended in great numbers with his father Keith, a former bucket and sponge man while Charlie was playing at the club, alongside his wife, showing great courage.

Thankfully the 38degC heat of Thursday had passed through and a more manageable 25degC proved less of a problem as both sides served up an entertaining game.

There would be speculation that Steve McKimm’s starting 11 would be close to those that walk out for next Saturday’s National League South opener against Dulwich Hamlet but that second half period might just have thrown a few doubts into that equation.

Kingstonian, managed now by Hayden Bird who has brought a fair few of his Merstham team of last season with him, started brightly and their performance over the whole game suggests that they will do very well in the Isthmian Premier this season. A wonderful cross field pass sent the ball behind the Angels’ back line for Reece Hall to latch onto and produce a fine finish after 12 minutes.

The goal sparked a response with Tom Derry to the fore and eventually, after 26 minutes, Tom Brewer spotted the run of Derry from a free kick which ended with the striker being brought down for a penalty which Joe Turner fired into the bottom left corner.

Derry continued to be the main threat with a shot marginally high and a header going similarly close but the half-time whistle came with the score remaining level.

A good run from stand-in skipper Jack Parter was the highlight of the early stages of the second half but, somewhat against the run of play, Kingstonian regained the lead when, on the hour, a straight through pass dissected the Tonbridge defence and Louie Theophanous fired past the advancing Jonny Henly.

Within three minutes the same act was repeated and the clinical Theophanous scored again. He completed a five minute hat-trick a minute later when a wonderful cross from Dan Bennett found the striker to score at the near post.

It was a wake-up call of the loudest order and manager McKimm responded with five changes from the bench. It brought its dividend when, after 71 minutes, Hession-Harries cracked home a fine shot from a tight angle to reduce the deficit.

A great escape looked on the cards when Hession-Harris’ cross found the excellent Alex Bentley at the far post who stretched to volley a cross into the path of Alex Read to score.

Tonbridge pressed hard for a face-saving draw with Rhyle Ovenden’s shot being comfortably saved and Bentley’s header narrowly over but it was not to be.

No points were lost, but a young man with his life in front of him has been. Rest in Peace, Charlie Slocombe.

Posted by baldangel at 20:26 No comments:

Tunbridge Wells' new look side, under the management of ex-Lordswood boss Richard Styles, put in an encouraging first half performance in which they held their Isthmian League South neighbours to parity at the break. Unfortunately, a second half that saw, over the course of the half, a completely changed team, the cohesion of the first half disappeared and Sevenoaks eventually romped home easy winners.

On a warm, humid afternoon, the Wells opened brightly and a fine move after five minutes ended with Fjord Rogers firing over and, after nine minutes, his brother and captain, Freeman sent a header also marginally over.

The first half-hour was largely dominated by Tunbridge Wells and it was against the run of play when a pass through the centre of defence allowed Frankie Sawyer a one-on-one with goalkeeper Cameron Hall which he clinically accepted.

But the lead was short-lived and the Wells were level six minutes later when a cross from the right was only half-cleared to the edge of the box from where Jason Thompson drove an unstoppable shot past Ben Bridle-Card.

The visitors twice went very close to taking the lead before the break when Fjord Rogers shot into the side netting after an thrilling run and, with five minutes remaining, Josh Biddlecombe saw a header cleared from the line.

Tunbridge Wells opened the second half brightly and, from the length of the field, it appeared they were unlucky not to receive a penalty when the ball was once again cleared from the line.

But Sevenoaks started to exert their quality and they went ahead on 64 minutes when Bradley Schafer struck from 25 yards.

Second half goalkeeper Callum Hampson made good saves to deny Adrian Stone before Ansley Everett and Schafer finished good moves after 74 and 78 minutes respectively to put the game well beyond the Wells.

Another well-worked goal after 84 minutes from Louis Collins put a somewhat unfair scoreline against the visitors.

Clearly a work in progress but there was plenty in the first half to please the travelling Wells support. 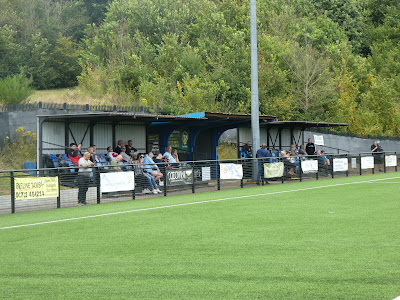 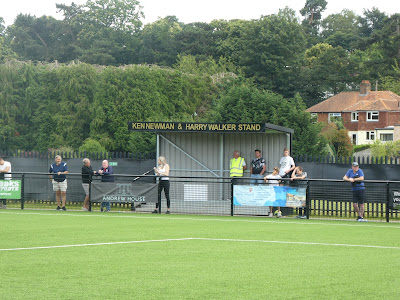 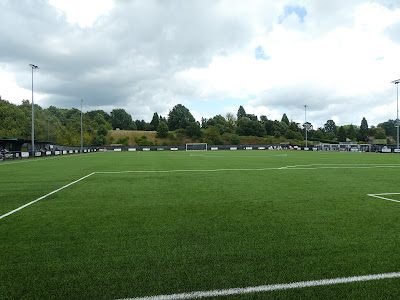 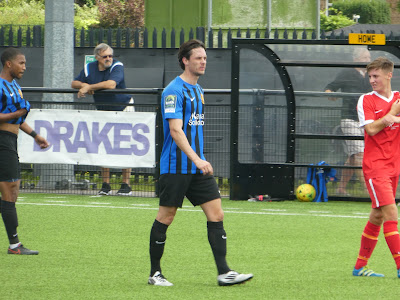 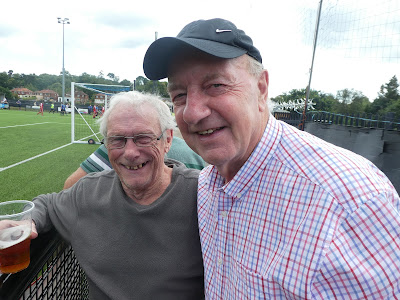 Posted by baldangel at 23:56 No comments: 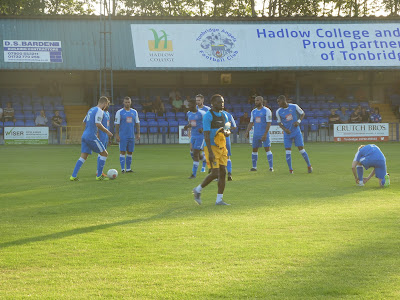 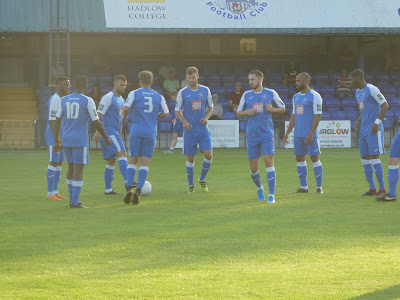 Posted by baldangel at 22:50 No comments:

It was interesting to hear from loyal, lifelong supporters of the Gills that they felt that both hearts and minds were softening towards Steve Evans. 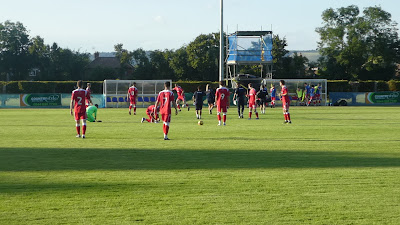 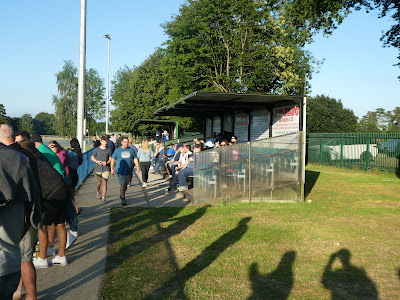 Posted by baldangel at 16:04 No comments: 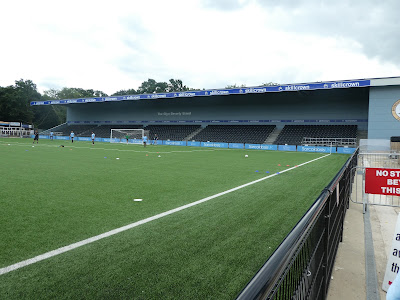 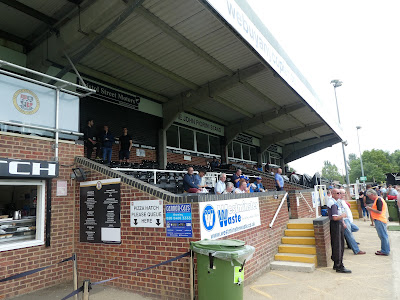 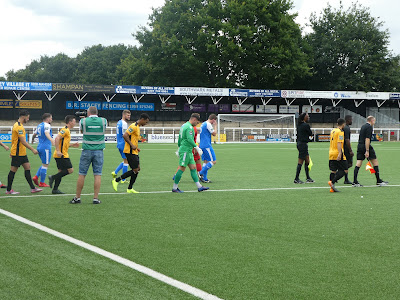 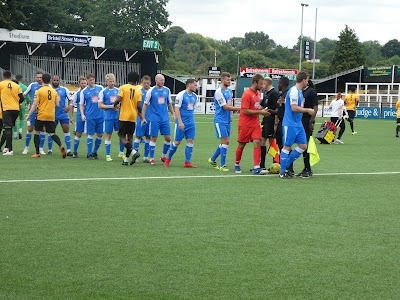 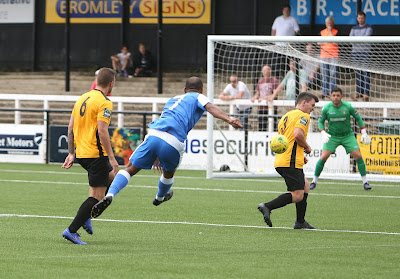 Posted by baldangel at 16:00 No comments: 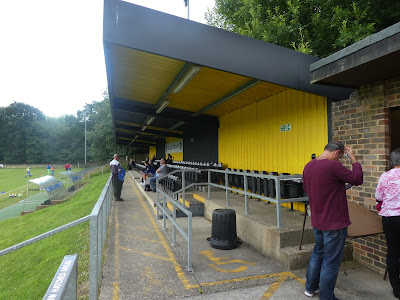 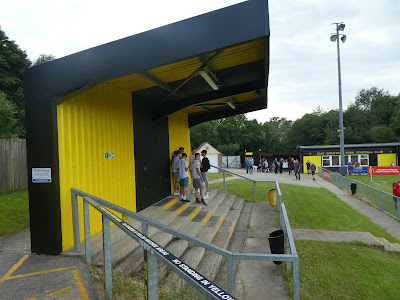 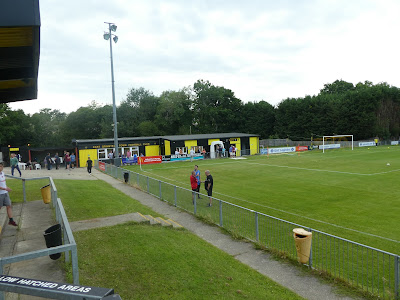 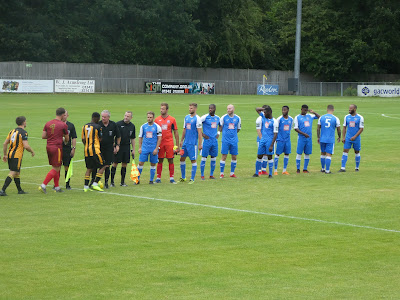 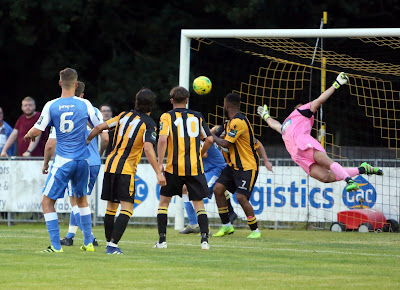 Posted by baldangel at 15:55 No comments:

A few less trialists, three players playing a full 90 minutes contributed to a less muddled second outing and on a warm afternoon, Tonbridge Angels were tested as they were asked to come from two goals down within the first nine minutes.

Woodstock Park is a rural backwater, so much so that in my serious ground hopping days it was a reluctant venue on a dark Tuesday evening but on a bright Saturday the narrow lanes can be negotiated with relative ease and there is a warm welcome on arrival. Credit goes to Sittingbourne for producing a programme, and a reasonable one at that for a quid and a turnout of 260, with a very decent Tonbridge following was admirable.

The visitors quickly found themselves behind when, two minutes in, a cross from the right to the far post saw a header parried away by Academy goalkeeper Joe Roberts but only into the path of another unnamed Sittingbourne striker who tucked it home from close range.

Roberts tipped over a well hit shot after eight minutes but from the resultant corner the ball as inadvertently directed into his own net by James Folkes to give the Isthmian South side a two goal advantage.

Certainly a response was needed and that came four minutes later when a free kick floated to the far post by trialist Tommie Hession-Harris was met with a Miles header to reduce the deficit.

Tonbridge now had the momentum and after Tom Derry brought a save low to his left from the Sittingbourne goalkeeper, another free kick from Hession-Harris which was half-cleared to the edge of the box from where Brewer drove home.

The Angels carved out chances for trialist Ellis Brown, who headed over and Smith whose shot was well saved, but parity was preserved until the break.

The second half brought the multiple changes, one of which introduced Harry Main, nephew of Tonbridge legend Jon, who was an interested spectator.

Both sides had good second half chances probably the best of them falling to Sittingbourne with the left winger proving to be the most wasteful although he did bring one decent save from trialist goalkeeper, Ted McDonnell.

Tonbridge finally wrapped up the win with four minutes remaining when a cross was headed back across the face of goal by Miles for Alex Read to bundle the ball home at the far post.

There were differing opinions from Tonbridge supporters as to whether any of the trialists deserved another match to prove their worth, personally I thought Hession-Harris and Ellis Brown might get third games, but whether there is a National League place for them is less likely. 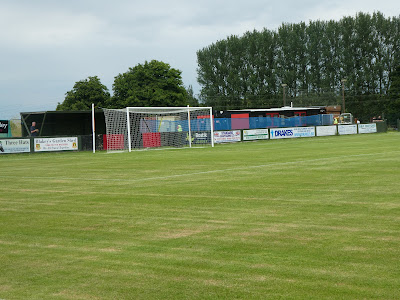 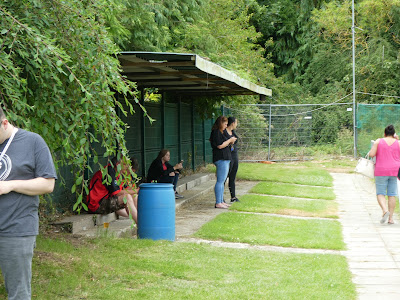 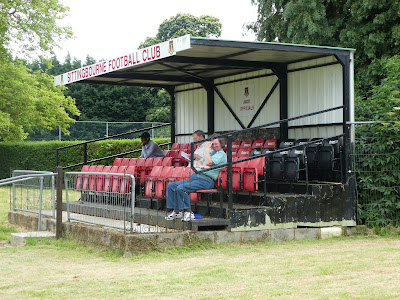 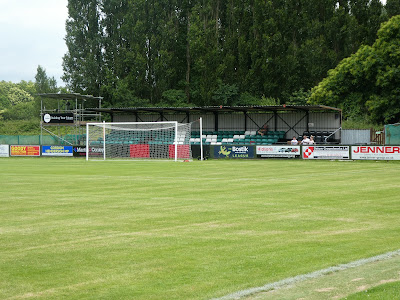 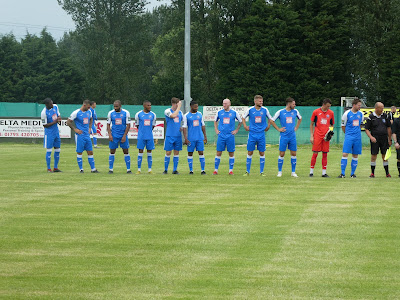 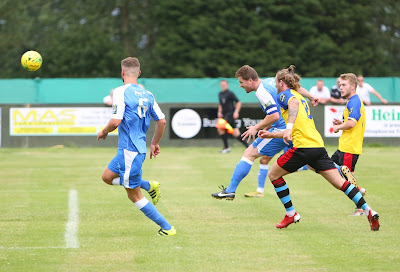 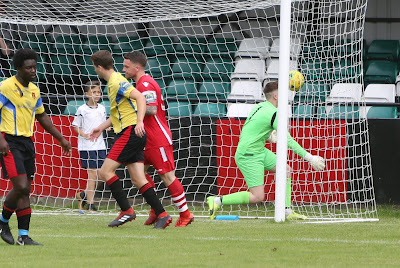 Posted by baldangel at 23:09 No comments: