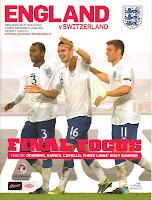 It was a month ago that Tonbridge sealed their elevation to Blue Square South and Gillingham’s season ended in defeat at Chesterfield and perhaps that is why this important European Championship qualifier seemed lost in the middle of Summer.

Jack Wilshere’s claim of being too tired to play for the Under-21s in European Finals tournament in Denmark was scoffed at, but I similarly was suffering from a lack of interest at the end of a long season. This match sort of crept up on us, so much so that, on the way to Wembley, I had no idea whether Matt Jarvis was in the squad or not . . . he wasn’t.

It was a little over four years ago that Wembley opened its doors for the first time with a visit from Brazil and still the new stadium factor sells out games. It cannot be anything other than that because England as a football team continues to frustrate and annoy. Following the game there was chaos on the Tube as the Jubilee Line was partially suspended so an uncomfortable journey back to Charing Cross added to the disappointment of the result and the performance of the national side, certainly leaving questions about the worthiness of a £50 ticket and all the associated costs that go with a Wembley visit.

Taking a positive from the match, England managed to retrieve a two goal deficit and really should have won the match had it not been for a woeful miss from Darren Bent, but that is where it stopped. After a tedious first half-hour, in which Joe Hart was forced into a couple of saves, the game sprang to life in the wrong fashion for the hosts. Tranquillo Barnetta scored twice in the space of three minutes with Hart at fault for both of the goals. An inswinging free kick from the left, 20 yards out, evaded everybody in the six yard box and Hart was unable to react as the ball cleared Rio Ferdinand’s head. Three minutes later from a more acute angle, Barnetta drove the ball towards the near post, James Milner broke from his position in the wall and the surprised Hart could only claw at the ball when it was already over the line. They were calamitous errors for which the likes of Robert Green and Scott Carson have been hounded out of the England team in the past.

The prospect of the loss of vital points awoke the England support, although it was mainly in a negative fashion and directed at Fabio Capello. Fortunately a Frank Lampard penalty within five minutes got the fans back behind the side. Jack Wilshere, belying his tiredness, showed nimble feet as he skipped past a couple of Swiss defenders before being brought down to earn the penalty.

Ashley Young was brought into the action at the start of the second half and his livewire display was to eventually earn him the man of the match award (for 45 minutes?). After six minutes of the half, Milner chipped a cross into the box; Leighton Baines used his chest to direct the ball back to Young, who scored with a well placed volley.

With most of the second half remaining it could be forgiven to make the assumption that England would go on to find a winner and so they should have done, but Bent produced a couple of misses that endorsed the opinion of many that, despite his good scoring record in the Premiership, he is not an international striker. Sent through on goal by a sublime Wilshire pass, Bent was one-on-one with the keeper who was able to smother his shot.

Worse was to follow, an Ashley Young shot from the corner of the penalty area was only parried into the path of Bent by Benaglio but with the goal at his mercy the wayward striker sent the ball skywards clearing the bar by some distance. As Harry Redknapp would say, it was a chance his missus would have put away.

The Swiss could have won it in the final minute with a shot the edged past the post and similarly with virtually the final kick, Stewart Downing shot into the side netting.

So, the curtain comes down on season 2010-11, in five weeks time Pre-Season begins and the long trudge through to Euro 2012, almost a year to the day, starts at Ashford United.
Posted by baldangel at 20:56 No comments: