Gillingham fans for so long endured nothing but heartache on the road, but at Moss Rose, Macclesfield on Saturday when Adebayo Akinfenwa tapped home a fourth goal in less than 25 minutes, those with good memories were able to use a chant long since forgotten, Easy, Easy. Gillingham are now on a run of the more acceptable variety and with it a march up the League table to a position where another win would put the Kent club within touching distance of the play-off places.

In a crazy first half, in which as many gilt-edged chances were missed as the five goals scored, both defences looked suspect from the outset. Gillingham went behind to an early goal from a free kick by Hamza Bencheriff. Kevin Maher had needlessly given away the free kick from which the Algerian scored with a wicked deflection that wrong-footed Alan Julian. Unfortunately the vocal muppets among the travelling support failed to spot the deflection and decided to abuse the Gillingham goalkeeper without reason.

They need not have wasted their breath as the visitors replied within a minute. Charlie Lee’s long throw unforgivably found its way to the left hand side of the box from where his fellow Posh loanee Chris Whelpdale drove the ball into the ground and high into the net with the home keeper Jose Veiga helpless.

Three minutes later Whelpdale produced a sublime piece of skill to turn, leave a couple of defenders in his wake, and cross to the far corner of the box where the unlikely figure of Josh Gowling volleyed home.

Whelpdale was instrumental again in Gillingham’s third goal on 19 minutes. His initial cross found Danny Spiller on the right who picked out Cody McDonald with an inch perfect cross that the striker converted with a close range header. Twenty minutes gone, four goals, two dodgy defences brought visions of Accrington Stanley to mind, but the hope that if seven goals were to be scored this time around it would be by the visitors.

When Gowling shot narrowly wide after 25 minutes, with the Silkmen’s defence once again AWOL, the thought of a high scoring victory strengthened. But two golden chances for the home side also embedded the fear that no amount of goals was actually going to make this game safe for the Gills.

After 33 minutes, some absolutely rubbish defending allowed Akinfenwa to tap home from a yard after his initial header had been parried by the goalkeeper. Safe, none of it, as Macclesfield spurned a couple more chances before the half-time whistle.

The second half was more of a pedestrian nature mainly due to both sets of strikers losing their eye for goal rather than either defence appreciably improving.

Chris Whelpdale was removed from the action on 56 minutes and when, late in the game, Charlie Lee joined his team mate on the bench, the Gillingham faithful had shown their full appreciation for the Posh boys’ contribution in turning Gillingham’s away fortune on its head. Thank-you for your help lads, you are welcome back anytime.

Chances fell to Akinfenwa and McDonald to put the game beyond the reach of the home side before Tyrone Bennett pulled a goal back with 20 minutes remaining, re-opening the fears that Gillingham’s away resurgence might implode as the home side finished strongly. Julian was forced to claw away a last minute effort from Bennett before referee Keith Hill brought the curtain down on Gillingham’s third successive away win.

Moss Rose is still rather non-league in its make-up, but is quite appealing in the process. The Main Stand that straddles the half-way line is small but perfectly formed and has a classic style not imitated anywhere else in the country. We were housed opposite in the functional Alfred McAlpine Stand that is the usual flat pack design that has none of the endearing features of the Main Stand. The open terrace behind the goal that in the past allowed the visitors standing positions is now only used for large support, so despite around 250 making the trip this was not enough to warrant its use.

A kindly lady pointed us in the direction of a Fish and Chip shop that took us past a genuine Coronation Street, with an old-fashioned road sign identical to that celebrated this week in the opening titles for the past 50 years. Funny, a fortnight ago, it seemed a similar length of time since we last won away.

Everybody appears to be very accommodating at Macclesfield, and that includes their defenders. 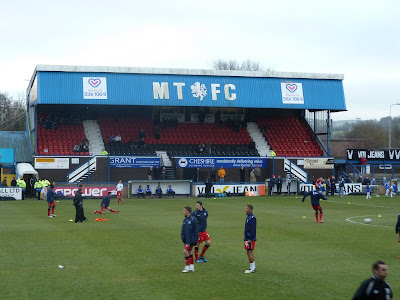 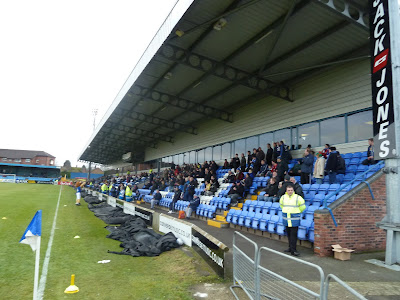 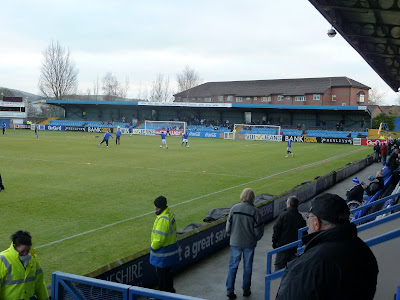